by John Biggs via techcrunch.com

Researchers at the University of Zurich  and EPFL have created a robot that shrinks to fit through gaps, a feature that could make it perfect for search and rescue missions. The researchers initially created a drone that could assess man-made gaps and squeeze through in seconds using only one camera. This extra feature — a scissor-like system to shrink the drone in flight — makes it even more versatile and allows these drones to react to larger or smaller gaps in nature. 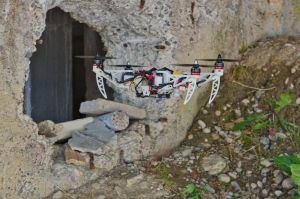 “The idea came up after we worked on quadrotor flight through narrow gaps,” said PhD candidate Davide Falanga. “The goal of our lab is to develop drones which can be in the future used in the aftermath of a disaster, as for example an earthquake, in order to enter building through small cracks or apertures in a collapsed building to look for survivors. Our previous approach required a very aggressive maneuver, therefore we looked into alternative solutions to accomplish a task as passing through a very narrow gap without having to fly at high speed. The solution we came up with is the foldable drone, a quadrotor which can change its shape to adapt to the task.”

The system measures the gap and changes its shape without outside processing, a feat that is quite exciting. All of the processing is done on board and it could be turned into an autonomous system if necessary. The team built the drone with off the shelf and 3D-printed parts.

“The main difference between conventional drones and our foldable drone is in the way the arms are connected to the body: each arm is connected through a servo motor, which can change the relative position between the main body and the arm. This allows the robot to literally fold the arms around the body, which means that potentially any morphology can be obtained. An adaptive controller is aware of the drone’s morphology and adapts to it in order to guarantee stable flight at all times, independently of the configuration,” said Falanga.

The team published a report on their findings in Robotics and Automation Letters. As IEEE notes, this is no flying drone dragon, but it is a far simpler, cooler and more effective product.

Interested in increasing your intuition and awareness in a safe and effective way?  Check out Demivolve Mind Enhancing Supplement.