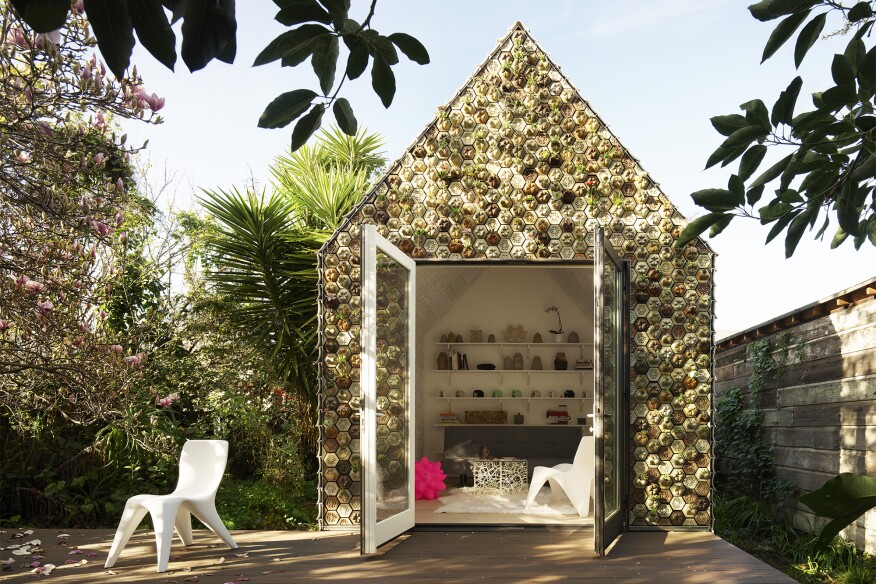 by Blaine Brownell via architectmagazine.com

Five years on, the interest in 3D printing has shifted from novelty to reality, as researchers formulate the various methods and materials used in such construction, and their benefits.

Since 2004, Behrokh Khoshnevis, the director of the Center for Rapid Automated Fabrication Technologies at the University of Southern California, has pursued whole building–printing with his contour crafting process, capable of producing a 2,000-square-foot house in a single day. A typical U.S. detached house requires six to nine months to build. The method extrudes a special mix of concrete from large nozzles suspended from a gantry crane. In addition to expediting construction, his method can reduce the risk of worker injuries and material waste.

Despite the “whole building” label, this approach does have its limitations. Additive manufacturing deposits successive layers of material in a single, continuous pass. This is not always conducive for constructing a typical residential wall, which often contains an air cavity. To date, examples of 3D-printed structures rarely include foundations or roofs—with the exception of domes or conical buildings. Whole building–printing also requires a significant amount of planning and mobilization to avoid unforeseen construction problems, such as scrapping a flawed print, and the resulting structure is often not adaptable to future changes. Ronald Rael, co-founder of San Francisco-based 3D printing think tank Emerging Objects and co-author of the upcoming book Printing Architecture (Princeton Architectural Press, 2018) with Virginia San Fratello (also co-founders of the architecture firm Rael San Fratello), believes that printing entire buildings is inherently a dead end.

“Buildings are culturally complex objects,” Rael tells ARCHITECT. “They respond to the environment, to their occupants, and even to culture and history in very specific ways.” Such responses are connected to functional differences between various material components and assemblies, such as walls, floors, exteriors, and interiors. “One material or material system cannot achieve all the demands that buildings require,” he adds.

Rael and San Fratello are pursuing an alternative, component-based approach to printing architecture, epitomized by their recently constructed Cabin of 3D-Printed Curiosities. The simple gable-roofed structure is composed of 4,500 separate 3D-printed modules designed for specific functions. Made from various materials, including Portland cement, sawdust, and wine, Rael relates the assembly of the variegated modules to a box of chocolates. The roof and side walls consist of seed-stitch tiles made from 3D printing ceramics in the shape of long, overlapping shingles. The interior surfaces are clad in wall tiles made of a PLA-based bioplastic derived from corn. Also 3D-printed, these opalescent modules are inherently light-transmitting and serve as diffusion lenses for LED strips encapsulated within the framed wall assembly.

The Cabin of 3D-Printed Curiosities demonstrates the benefits of using multiple components that are scaled to the human hand, like traditional bricks or roof shingles, but can be fabricated by several compact 3D printers simultaneously. “If we rely on a single machine to produce a single building, we will be disappointed simply from the perspective of execution,” Rael says. “However, a battery, or farm, of printers, has its advantages in that if a printer fails, all the other machines continue to fulfill their production, and the failed component can simply be reprinted.”

As the size of 3D-printed structures increases, however, a hybrid method that includes aspects of both whole building and component-based approaches might prove ideal. Described more accurately, such a heterogeneous process consists of individual components, as Rael advocates—yet these components can be of widely varying size and configuration, including entire surfaces printed in a single pass.

Amsterdam-based DUS Architects’ Canal House represents one example of hybrid construction. Using a bioplastic feedstock made from 75-percent plant oil with microfiber to reinforce tensile strength, the firm has printed a variety of elements, including hollow wall modules and single building components up to 11 feet in height. The office’s 3D Print Urban Cabin serves as a demonstration of this technique, with multifaceted surfaces composed of several individually printed panels—some of which are filled with concrete for added stability. Although this structure is of similar size as the Cabin of 3D Printed Curiosities, a hybrid or multi-scalar approach becomes even more plausible for larger, multistory structures that could benefit from both the adaptability of hand-scaled modules as well as the expediency of sizable assemblies printed in a single pass.

As for the broad adoption of 3D printing in architecture, many hurdles remain. According to Khoshnevis, implementing Contour Crafting in the U.S. “may be initially complicated by prevailing policies that regulate labor, zoning, and land costs.” Likewise, old habits die hard. “There is the conception that 3D printing will supplant the traditions of architecture already in place,” Rael says. “However, we have seen how the traditions of building that have developed over the last 10,000 years of architectural history are still actively practiced, which suggests that it is unlikely that 3D printing will be the last stop in our quest for shelter.”

Nevertheless, 3D printing in building construction has made remarkable headway in the last decade, and the lofty ambitions of its proponents show no signs of abating. In all likelihood, the primary future concern will not be whether additive manufacturing is a viable building construction technique, but rather how 3D printing may be best employed to renovate and update existing structures as well as to create new ones.

How to Harness the Power of Your Breath

6 Foods I Recommend Eating Every Day For A Long Life: A Doctor Explains