Stem cells in the brain determine how quickly our bodies age, researchers have noted. But by introducing fresh stem cells, part of the aging process could be slowed down or reversed, a new study finds.

Stem cells hold the key to the aging process, according to new research.

As humans, we persist in being baffled by the steady aging of our bodies, which sometimes seems to occur at a faster rate than we might expect.

Consequently, we often do our best to try to stall or “cheat” the aging process using a wide range of “remedies,” from improving our diets to undergoing plastic surgery.

Researchers are now looking into how stem cells found in a region of our brain called the hypothalamus might play a key role in how swiftly we age.

Dr. Dongsheng Cai, from the Albert Einstein College of Medicine, in New York City, NY, alongside a team of specialists, has found that adding fresh stem cells to the hypothalamus might be the way to go if we want to delay old age.

The results of this study are published in the current issue of Nature.

Previous research conducted at the Albert Einstein College of Medicine had already shown that the hypothalamus plays a crucial role in controlling aging.

Dr. Cai and his team have now been able to locate the specific cells that are responsible for the aging process: neural stem cells also involved in neurogenesis – that is, the creation of new brain neurons.

The researchers noted that the number of brain stem cells in the hypothalamus steadily decreases with time, and this impacts the speed at which the aging process unfolds. However, they add that their study has shown that this process can be counteracted.

“Our research shows that the number of hypothalamic neural stem cells naturally declines over the life of the animal, and this decline accelerates aging. But we also found that […] [b]y replenishing these stem cells or the molecules they produce, it’s possible to slow and even reverse various aspects of aging throughout the body.”

In their study, the researchers used mice to test the role of neural stem cells. They noticed that the number of stem cells in the animals’ hypothalamus started to decline at around 10 months old, which, according to the scientists, is long before aging becomes apparent.

The next step in the study was to test for causation, rather than just correlation, between decreasing numbers of neural stem cells and the onset of aging.

To do this, they selectively disrupted the relevant stem cells in middle-aged mice. They observed that, in these mice, aging took place much faster than in the control specimens, whose neural stem cells were left alone. 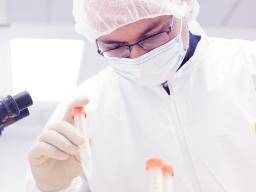 Finally, the researchers wanted to find out whether adding a “fresh supply” of stem cells to the hypothalamus could reverse the aging process.

They inserted new stem cells both into the hypothalami of the mice whose stem cells had been disrupted, and into those of normal, healthy middle-aged mice.

Dr. Cai and his colleagues found that this action was productive: in all the mice, the aging process was either slowed down, or different aspects of aging were counteracted altogether.

What happens, the researchers note, is that the stem cells release microRNAs (miRNAs), which are a type of molecule involved in the regulation of gene expression.

The miRNAs are contained by exosomes, which are extracellular particles that the stem cells release into the fluid found inside and around the brain and the spinal cord, or cerebrospinal fluid.

What the researchers specifically injected into the mice were exosomes containing miRNA that had been collected from hypothalamic stem cells. The extracted exosomes were released into the mice’s cerebrospinal fluid and allowed to act.

Dr. Cai and his colleagues measured the effect of the stem cell “supplements” by analyzing tissue collected from the mice, as well as monitoring improvements in the specimens’ muscular endurance, cognitive abilities, and social behavior, among others.

The scientists explain that further research will include establishing which particular miRNAs and other particles released by neural stem cells are specifically involved in the “rejuvenating” process.

The researchers are hopeful that these studies may, in time, lead to much more efficient ways of slowing or even halting the effects of aging.

Scientists Are Starting to Test Claims about "Microdosing"

Behold! SpaceX’s 1st Crew Dragon Spaceship Is On the Launchpad